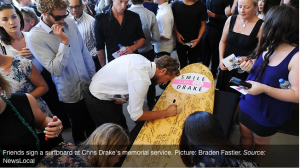 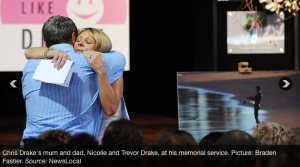 It was a memorial not of anguish but of prominently displayed bright, happy faces; each bearing the words: ‘Smile Like Drake’.

Family and friends of 23-year-old Manly law student Chris Drake, who was swept from a rock pool at North Curl Curl on March 16, were encouraged to follow the example of the man known for his infectious smile at St Augustines College, Brookvale, on Thursday afternoon.

Smiley face logos carrying the phrase ‘Smile Like Drake’ flanked a huge photograph on the stage of the school auditorium showing the young surfer riding a wave and revelling at one of his favourite places: the surf.

His parents Trevor and Nicolle, who run surfboard storage and custom joinery businesses in Brookvale, vowed to spread the positivity of a humanist they believed was destined for great things.

Mrs Drake remembered her son being struck by the ‘Free Hugs’ online video.

“Well, Chris gave free smiles,” she said. “Who knew one person’s smile could have such a profound effect.

“There is no doubt in our minds that Chris had a higher calling, for humankind and Mother Nature.

“He has gone back to his ocean home, and we will make good of this.”

Mr Drake told the audience the former junior pro surfer had an “earthiness” about him and believed his spirit would live on in the sea.

He recalled a feeling of euphoria when the family entered the water to go swimming at Manly days after the tragedy.

“It was like (Chris) was wrapping himself around us and cuddling us,” he said.

“It was the most euphoric thing I’ve ever felt. It made us feel there is a good in us. That we can move on.”

The young vegan and non-drinker was with friends at the rock pool before tragedy struck. The beach was closed due to rough seas.

One of those friends, Huon ‘Bam’ Fiet, told the service Chris had gone to help two girls in difficulty in the pool before being swept away.

“Chris’ last selfless act was to think of someone else’s safety rather than his own, thus making him vulnerable,” he said.